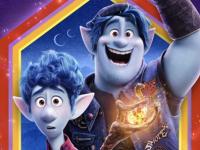 It’s an epic journey through a magical world not entirely unlike our own as Stars & Stripes New Braunfels presents Pixar’s fantasy feature, Onward!

Set in a mythical world where magic has slowly been replaced by more modern conveniences, Onward tells the story of elf brothers Ian and Barley Lightfoot who, per the request of their deceased father, attempt a magic spell to bring him back for just one day. When the spell doesn’t quite work as expected, the two must venture beyond their suburban world on a quest to complete the spell and reconnect with their departed dad.

At its heart, Onward is an emotional tale that has some personal significance for the film’s director Dan Scanlon. Scanlon, a story artist at Pixar who turned to directing with 2013’s Monsters University, also lost his father at a young age and says he first conceived the film’s premise when reconnecting with his dad through the discovery of an old audio recording.

Like most Pixar films, Onward is sure to conjure up a variety of emotions and what better way to bring on the feels than a magical night at Stars & Stripes New Braunfels! Click the link below for your tickets!