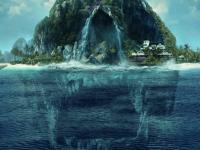 Dreams are coming true at Stars & Stripes New Braunfels, but not in the way you think, as masters of horror Blumhouse Productions deliver a chilling take on a television classic! It’s Fantasy Island!

This certainly isn’t your parents’ Fantasy Island! The original, of course, was a long-running tv series from the late 70’s where Ricardo Montalbán starred as the charming Mr. Roarke. Each week, guest stars would visit Roarke’s tropical island resort where each of their secret fantasies would mysteriously become a reality.

In this cinematic retelling, Michael Peña stars as Roarke, only things are considerably more sinister as the guests’ dreams come to life… as nightmares! Their tropical vacation then becomes a fight for survival as the guests must GET AWAY from the deadly getaway.

You’ll want to schedule yourself a getaway for an evening watching Fantasy Island at Stars & Stripes New Braunfels! Click the link below to get your tickets.