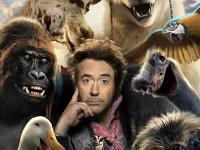 Robert Downey Jr. stars as the veterinarian famous for his ability to speak, squeak, squawk and talk with a menagerie of animals. When Queen Victoria falls ill, the good doctor sets sail with said menagerie to a mythical island in search for a cure. Dolittle is certainly not the first big-screen adaptation of Hugh Lofting’s series of books. Most notably is the 1967 musical where Rex Harrison’s doctor tries to discover a giant sea snail, followed by the 1998 remake where Eddie Murphy’s doctor tries to… be a better husband and father? Not quite as spectacular, but still good.

Like the Eddie Murphy version, Dolittle features a star-studded cast of actors providing the voices for the doctor’s furry and feathery friends. There’s Emma Thompson as Polynesia, a parrot and Dolittle’s most trusted advisor. Octavia Spencer plays Dab-Dab, a duck with a metal leg. There’s John Cena as a polar bear, Ralph Fiennes as a tiger, Kumail Nanjiani as an ostrich, and Downey’s MCU costar Tom Holland as Jip, a dog who wears glasses.

Whether you speak to them, or not, your four-legged friends are welcome at Stars & Stripes New Braunfels! Leash them up and bring them with the whole family to see Dolittle! Click the link below for your tickets!